10 Reasons Your Child Should Be Outside Right Now 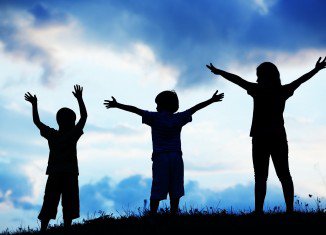 It shouldn’t come as a surprise to anyone that kids these days just aren’t getting outside very much. Drive through any suburban neighborhood on a Saturday and the groups of bicycling youngsters and impromptu street football games that were so common just a couple of decades ago just aren’t there.

Corralled indoors by over-protective parents and the allure of passive electronic entertainment (Did you know that the average American kid spends 53 hours a week using entertainment media? Where do they find the time?), today’s kids are missing out on the vast benefits of being outdoors. Here are some reasons to make Little Johnny back away from the game controller, slip on some shoes (or not… but it might be cold outside), and head out into nature. He might grumble and complain, but someday he’ll thank you for it.

And you should probably get up and head out there with him. There are plenty of benefits for adults, too.

1. Exercise. Childhood obesity is a growing epidemic that has more than doubled in the past decade and is the most visible symptom of sedentary indoor life. Children’s bodies were made to move, to run and jump and climb, not sit for hours on end with only thumbs in motion over game controllers or tapping out texts to their “friends”. It is in the outdoors, where big movements don’t threaten expensive furniture, fragile heirlooms, or parental sanity that children are likely to burn the most calories.

3. Happier Mood. Sunlight also boosts the body’s level of the hormone seratonin. Seratonin is a neurotransmitter that helps regulate mood, memory, and appetite. More sunlight means less depression and happier kids. So if your kid is feeling sulky or irritable or just generally grumpy, he might just need a trip outside. There was a reason our mothers sent us to play outside when we were sullen and grouchy. They knew what they were doing without reading all the newest scientific research.

4.Healthy Immune System. Playing in the dirt actually makes kids healthier. The body learns by doing (just like the brain) and early exposure to germs teaches the body the proper immune response to foreign invaders. As an added bonus, sunshine on bare skin stimulates the body’s production of Vitamin D which helps the body fight off infection and helps prevent the development of autoimmune diseases (like rheumatoid arthritis). Research in adults suggests that Vitamin D helps lower the chance of developing heart disease, diabetes, and certain types of cancer. (Really great reasons to get outdoors ourselves. Playing outside isn’t just for the very young.)

6. Improved Learning. Studies have shown that being outside, even for just a few minutes, helps people diagnosed with ADHD to better focus. Other surveys indicate that schools still offering students free-play recess have higher test scores (While admittedly not always the best indicator of actual learning, it is the one most readily available). Being outside also helps improve memory, which proves that trees and fields and flowers are the best cognitive enhancers.

8. Stress Relief. While it might seem absurd to suggest that children suffer from stress, you might want to consider the pressure they experience daily to test well, get good grades, and sit still and quiet for hours on end in the school environment. For a kid, school life can be incredibly stressful. Studies have shown that people spending time in nature have lover levels of cortisol (a hormone released during times of stress). Also, among office workers (and our kids’ classrooms are often very similar to sterile office environments), even a glimpse of nature through a window is associated with lowered stress and higher satisfaction.

9. Better Vision. A rather large body of research proves outdoor play has a protective effect on children’s eyesight. “Increasing time spent outdoors may be a simple strategy by which the the risk of developing myopia (nearsightedness) and its progression in children and adolescents,” concluded one 2012 study published by the American Academy of Ophthalmology.

10. Hope For The Future. In a world where the important things are often cast aside for what we want right now, it’s important to develop forward thinking, especially in the future generation. One study suggests that exposure to nature helps us to focus into the future, perhaps helping develop real solutions to long-term problems like resource exploitation, population growth, substance abuse, and the obesity epidemic. So while Little Johnny is focusing on rolling in the grass at this very moment, he may actually be developing the kind of forward thinking that just might save us all.