4 Lifestyle Changes That Will Boost Your Mental Health 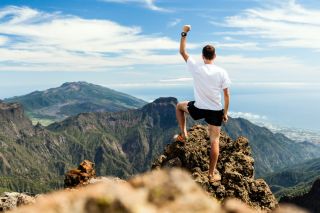 Post published by David Sack M.D. on Apr 21, 2015 in Where Science Meets the Steps

When we seek help for a mental health condition, we can expect to hear about various medications and treatment options, but what’s often missing from the conversation is any talk of lifestyle changes. In a recent University of Illinois study, about half of those with symptoms of mental illness reported that they receive no wellness advice from their health care provider.

That’s a lamentable oversight because lifestyle changes—things as simple as nutrition and exercise—can have a significant impact on quality of life, for any of us, but especially for those dealing with issues such as depression, anxiety, bipolar disorder and schizophrenia. They can also help minimize the development of risk factors that can lead to conditions like diabetes, cardiovascular disease, and hypertension, all of which are seen at higher rates in those with mental illness, the study noted.

If you are dealing with a mental health challenge, take the initiative when speaking to your clinician. Ask for specifics on what changes you can safely make in your daily life to improve your mental health; there’s no single answer. But research has shown that lifestyle changes in several key categories can pay healthy dividends for most. Among the most powerful:

Research shows that our diet can influence our mental health, for both good and bad. Fruits and vegetable are associated with better mental well-being, according to recent research from the University of Warwick. That’s important because mental well-being—feelings of optimism, happiness, self-esteem and resilience—can help protect not only against mental health problems but physical ones as well.

Fatty foods, on the other hand, may increase the risk for psychiatric symptoms by changing the bacteria that live in our gut, according to new research. A study done with mice showed increased anxiety, impaired memory, repetitive behavior, and brain inflammation as a result of a high-fat diet. Some fats, however, fall into the “good” category. Omega-3 fatty acids such as are found in salmon, for example, may help  with some forms of depression.

Sugar, of course, should have only a minimal place in your diet. Not only can it spark rapid weight gain and an addictive response in some, it has been linked to higher rates of depression and can make mental health symptoms worse, according to the National Alliance on Mental Illness(link is external) (NAMI).

You’ll want to check with your doctor before you start any exercise regime, but physical activity has been shown to have significant benefits for those dealing with mental health issues. A Southern Methodist University labeled exercise a magic drug for those with anxiety and depression disorders and called on doctors to more widely prescribe it. Research shows even low levels of activity—things such as walking or gardening for half an hour a day—can help ward off depression now and even later in life. Exercise has also been shown to improve the mental and physical health of those with schizophrenia. (One note: If you have bipolar disorder, be aware that exercise can trigger mania in some. Get your doctor’s OK before adding new forms of physical activity to your life.)

As a bonus, exercise helps not only with mental health and fitness but also with weight control. This is especially important because weight gain is a side effect of many medications for mental illness. Extra pounds may not only make you less healthy and more prone to developing illnesses such as diabetes, they can also add to your mental distress.

Stress feeds mental illness, and mental illness feeds stress. Taking steps to minimize the stress in your life can help slow this vicious cycle. Consider adopting techniques such as mindfulness meditation; a Carnegie Mellon University study found that even 25 minutes a day for three days in a row can reduce stress and build resilience. And a Johns Hopkins research analysis determined that meditation can improve symptoms of anxiety and depression.

Yoga is another powerful choice for stress reduction, as well as being good exercise. A Queen’s University study found it can even help us view the world in a less negative, less threatening way, which can be a huge benefit for those with mental health disorders. (Again, a note for those with bipolar disorder: A recent study found risks as well as benefits in yoga. According to a recent study, some with bipolar disorder found it a “life-changing” positive, while a minority reported it can intensify both high and low moods.)

We all crave a refreshing night’s sleep, but don’t always get it. We can boost our odds by committing ourselves to good sleep hygiene. That means going to bed and getting up at a consistent time, getting sufficient exercise (earlier in the day rather than late at night), avoiding heavy evening meals and caffeine, practicing relaxation techniques, and forgoing activities that get in the way of our shuteye, such as those Netflix marathons. If you’re still having trouble, don’t turn automatically to sleep aids, which research shows may actually shorten your lifespan. See your doctor or a sleep specialist for help.

Making lifestyle changes in support of your sleep is well worth the effort. Poor sleep has multiple negatives: Studies show fatigue makes it harder to choose healthy foods, it’s been linked to obesity and cell damage, and it can make mental illness symptoms worse. Sleep deprivation has been shown, for example, to trigger schizophrenia symptoms. Consistently good sleep, on the other hand, can help keep stress at bay, as well as boost mood, protect the brain and give us the energy we need to deal with all that life throws at us.