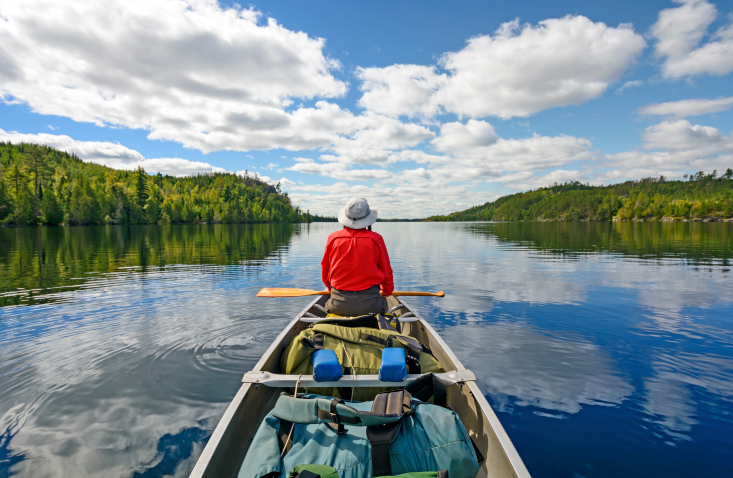 It’s no secret more and more of us are becoming addicted to technology. As Richard Louv says in his book The Nature Principle: Reconnecting with Life in a Virtual Age, “What would our lives be like if our days and nights were as immersed in nature as they are in technology?” In an age where everyone has a tablet, smartphone, and/or computer, maybe it’s time we turn our attention back to nature and the roots of human connection to the earth.

Here are five ways nature can lead to a healthier life:

Have you ever taken a walk and felt more relaxed? Perhaps even rejuvenated? Several studies have emerged noting the emotional benefits of spending time in nature. According to Japanese culture, Shinrin-yoku, or “forest bathing,” is essential to a balanced life. This practice, which began in the 1980s, holds that mindful time spent in the forest reduces stress, improves mood, and promotes an “increased flow of energy” (Zammit, 2015).

Several studies have indicated that time spent outdoors reduces symptoms of depression and elevates mood. An astounding 95% of participants in a study from The Mind Organization noted a mood improvement after time spent outdoors. Previously feeling depressed, stressed out and anxious, these participants reported that they felt more relaxed and tranquil.

What is it about nature that makes us feel calmer? Martin Jordan, in his book Nature and Therapy, argues it’s about reconnecting to the roots of civilization. It was not until the late 1800s to the early 1900s that the United States became increasingly industrial and urbanized. Jordan argues that this “split” between individuals and nature originates from moving into more populated areas and less involvement with and dependence on farming and agriculture.

In Reconnecting With Nature, Michael J. Cohen argues that many individual and societal issues are a result of our disconnection from the natural world. He cites that focusing on all of your senses when in nature can help an individual feel connected to the environment. This sense of connection leads people to view themselves as a part of a larger system.

Most people acknowledge that medical technology has increased the human life expectancy (McMichael, 2001). However, did you know that time spent in nature can also lengthen your life? One study found that people who can easily access natural environments have fewer health complications and are, overall, a healthier population (Kaplan, 1995). Trees are essential in urban areas to remove harmful pollution, and natural areas tend to encourage physical activity.

It has also been widely studied and published that regular interaction with nature reduces stress levels, which can in turn reduce one’s heart rate and, some say, possibly cardiovascular disease and the risk of stroke. Being outdoors also promotes healthy levels of vitamin D, which is essential to bone growth and strength. One study even concluded that exposure of outdoor light of nursing home residents can even improve their circadian rhythms and general orientation (Calkins, et. al. 2007).

Children and adolescents who struggle with attention-deficit hyperactivity seem to especially benefit from walking in and/or interacting with a natural setting. In a 2004 study, parents of children with attention difficulties agreed that “outdoor activities reduced ADHD symptoms more than activities in other settings” (Kuo, 2003).

Adolescents with attentional struggles aren’t the only ones who can benefit. A study in The Journal of Environmental Psychology found that viewing a natural scene for only 40 seconds could reduce mental fatigue and increase productivity in employees.

Nature can also be a powerful resource when it comes to healing and recovery. One study found that patients who had a view of a courtyard or trees were more likely to heal faster after surgery than those who did not. Not only did these patients recover more rapidly than those who had a view of a brick building, they also required fewer pain medications, suggesting a natural view does indeed have healing and restorative effects (Ulrich, 1984).

In conclusion, it’s clear that interaction with nature has innumerable benefits—both physical and psychological. Next time you reach for your phone, consider taking the dog for a walk in the woods instead. Your health will thank you for it.

The preceding article was solely written by the author name above. The view and opinions expressed are not necessarily shared by GoodTherapy.org