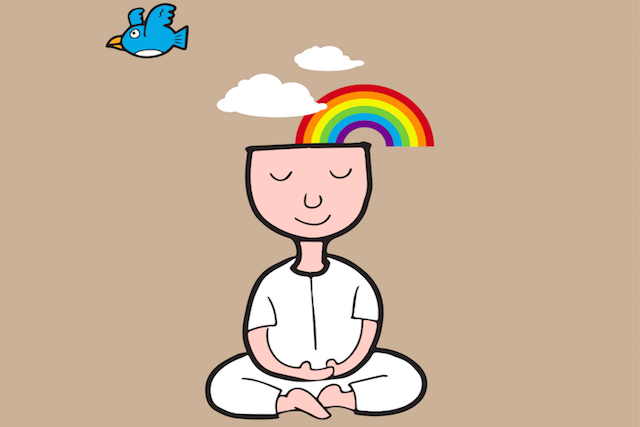 “Enlightenment is a destructive process. It has nothing to do with becoming better or being happier. Enlightenment is the crumbling away of untruth. It’s seeing through the facade of pretense  It’s the complete eradication of everything we imagined to be true.” ~Adyashanti

I don’t know exactly when it happened.

It was probably about eighteen months ago, maybe a couple of years. I can’t really remember, and it doesn’t really matter.

I was up to my neck in stress, and having one of those days.

So I got home from work, sat in my meditation chair, and tried to calm myself down. But the stress and the frustration weren’t going anywhere. I wasn’t going to simply breathe it away.

As I sat there, struggling to relax, I found myself more and more wound up, until a deep pressure was gripping my forehead. Suddenly, in a split second, I just let go, and the flood gates poured open.

It wasn’t that. It was just… letting go. And I realized at that moment that all my worries were tangled up this thick web of beliefs I had about what I should have been experiencing.

See, it sounds like a cliche, and maybe it is, but I realized that I didn’t need to get anywhere. Exactly where I wanted to be was hidden behind layers of beliefs. It was cloaked behind a thick forest of shoulds and should-nots.

But as much as I’d heard this before, it wasn’t until I was actually able to give in that I could start to clearly see the unconscious beliefs that had been getting in the way of my inner peace.

To some extent, everyone seeking change and peace are initially guided by ideas. But I’ve come to realize since then that the real change happens when you let go of ideas, as opposed to following new ones. After a long process of meditation and journaling, I found that the nine beliefs l describe below are what we often hold onto unconsciously.

I also came to the understanding that training my mind to “be present” or “be calm” could only get me so far. While I had many fleeting moments of peace, they often felt as if they came on top of a background of noise and confusion.

When I started to let go of these ideas, the inner peace became the background, and the noise became what would visit and leave.

Here are nine unconscious beliefs about life that get in the way of our inner peace.

1. “I need to be doing something right now.”

This is an incredibly subtle belief that most of us don’t even realize we are holding onto. It stems from our obsession with productivity and achievement, and it manifests as a constant, itching discontent.

Though our ego tricks us into believing we need this feeling to get things done, when we can let it go we see a lot of our anxiety dissolves and our relaxation deepens. We’re also much more likely to enjoy what we need to do without the constant internal pressure of feeling that what we’re doing in this moment is never enough.

This is another cliche that I’m sure most of us are aware of. But despite acknowledging that we don’t need to get anything to be happy, it’s easy for us to get caught up in the chase.

To overcome this, we need to be mindful of when we have the feeling that we need something before we can be happy. When we see we’re doing this we can practice letting go of that need, even if only for a brief moment. The more capable we become at doing so, the more we will naturally experience happiness in the present, and the less our minds will fixate on ideas of the future for fulfillment.

This is another myth that gets in the way. Many of us feel that we are far from inner peace, and we idolize those who seem to have found it. Because of this, we unconsciously believe that it’s a long way away from where we are in our lives, and we need to go on a long journey to find it.

Maybe we’ve read books that suggest that fundamental change in how we feel or act takes years of difficult training or some sort of pilgrimage. But often it is letting go of the belief that what we want is so far away, and understanding that when you stop striving so aggressively you will start to see the calm you’re looking for. It is this process of turning your beliefs upside down that becomes the journey in itself.

4. “If I express my emotions honestly people will think I’m weak.”

We’re often taught, as we grow up, to keep a lid on our emotions. This is common for responses that are considered socially inappropriate such as anger, fear, and sadness. Though in many ways we’re also taught to limit how much we show our positive emotions such as joy and excitement. This leads us, in adulthood, to believe that honest expression will be met with disapproval by others.

The irony in this is that as everyone is dealing with the urge to be authentic, those that actually do so are often met with respect and admiration.

This is similar to the issue we have with emotional expressions. We hide certain aspects of our personality, defining ourselves publicly by what we show and privately by what we’ve hidden. The reality is that you are a lot more than either of those stories, and people will gravitate toward the real you because they appreciate honesty.

In our culture, we fixate too much on social comparisons between individuals. When we don’t feel good, we look at what we have and feel guilty for not being happy enough. Or, we look at what we don’t have and wonder why we’re not as happy as the next person. Happiness isn’t something you need to have all the time; it comes and goes, like any experience, but it’s not a prerequisite for being human.

There’s been a huge movement in the last twenty years toward personal development. Though a lot of these ideas are healthy, they can be driven by toxic motives. Most people don’t feel they need to better themselves out of a genuine need to improve their community, but out of the feeling that they’re not good enough in the first place.

When you can strip yourself of this idea you’ll soon realize that the chase to being your best self is infinite and anxiety-inducing. You’ll see that you can love and appreciate yourself now, as you are, without needing to be someone else before feeling okay.

This is a tough one and is related to the feeling of needing to be your best self. Though gratitude is important, it doesn’t mean we should walk around with the feeling that we’re in debt to the universe. We see this when people pathologically try to prove their worth to others. When we let go of the deep feeling of debt and obligation, we can then really start to give people what we have to offer.

9. “There was a time in my past that absolutely sucked.”

Often we become so identified with bad times in our past that they get in the way of us enjoying the present. We define ourselves with these past experiences and feel we need to share them with everyone we know before they know the real us. But when we come to realize that they are far less significant than we initially thought, we stop feeling like imposters and we let old memories fall away.

Many of these beliefs still come up in my day to day life. Sometimes when I start getting close to new people, I have the feeling in the back of my mind that they don’t know me until I’ve retold them a series of clips from my life story. I understand though that these stories aren’t who we are in this moment. What other people think of us and what we think of ourselves is constantly changing.

Other times I find myself tired, or sick, and there’s an itching feeling that I should be happier, or I should just be doing more with my time. And like many of us, I still need to work on expressing my emotions honestly, without the fear that others will see it as a weakness.

All of this is okay. These beliefs took a lifetime of conditioning to cement themselves in our minds, so it’s only right they should take a little time and effort before they’re able to be completely let go.

Fortunately these constructs don’t have the same kind of grip over my psyche that they once had. In time, my anxieties have started to fade away and I’ve been able to ruminate less over unnecessary questions.

This site is not intended to provide and does not constitute medical, legal, or other professional advice. The content on Tiny Buddha is designed to support, not replace, medical or psychiatric treatment.