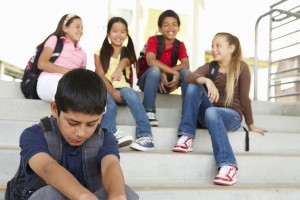 That’s the finding of a study published in Lancet Psychology, which highlights the fact that we’re only just beginning to understand the long-term impact that bullying has on the mental health of our children.

Dr. Dieter Wolke, the lead author of the study and a Professor at the University of Warwick, noted that bullying should not be considered just another part of growing up. As discussed by Dr. Mark Dombeck in an article for MentalHelp.net, bullying has long-term consequences like:

In the same study, bullied children were found to have higher levels of general inflammation throughout their bodies, and this is a potential cause of health issues like cardiovascular disease and metabolic syndrome.

So, What Are We Going To Do About It?

Now that we’ve confirmed that bullying is a problem worth addressing, it’s time to talk action. Here are several techniques you can put into practice:

Teach Your Children Confidence:Bullies thrive on putting others down – and few things stop them faster than a child who’s confident enough to stand up to them and has a feeling of being happy and successful in life. This is easiest to do when you support your children’s interests – whatever those may be – and encourage them to succeed.

You can also talk to them at a young age about bullying, teaching them how to recognize when they’re being bullied, adjust their frame of mind, and confidently deal with the situation.

Monitor Their Online Activities:Bullying is no longer limited to the school playground. Many children have received their attacks online, and these incidents – popularly known as cyberbullying – mean that bullies can torment other children even when not physically present. Fortunately, cyberbullying is easier to deal with than normal bullying.

Start by teaching your child about privacy settings and blocking other users on forums and social networks. This is a form of empowerment, where your child can simply say “Go Away” when a bully bothers them.

You can also take advantage of new types of which allow you to review your child’s smartphone activity and watch for signs of bullying. If you wouldn’t let them go to a playground unsupervised, you shouldn’t allow them to be online without being watched, either – the risks are quite similar, and parental oversight is valuable in both situations.

Work With Their School: Schools are legally required to take actionable steps when bullying occurs, and one thing most schools take seriously is an upset parent who’s willing to go to any lengths to get a problem resolved.

You can use this information to your advantage, citing the Lancet study and explaining how the long-term physical and mental harm means that a zero-tolerance policy is the only acceptable option for the school. Get your friends involved if you must – you can make a difference.