Mindful Parenting: Choose How You React 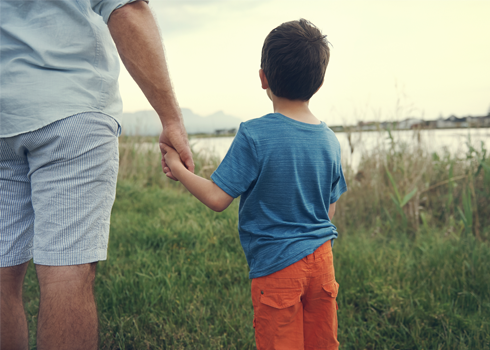 Putting space between you and your reaction allows you to respond with kindness—and gets you out of autopilot mode with your children, Mitch Abblett writes.

In any moment as parents, we can choose to react or let it go. I’ve witnessed moments of parents I was working with holding tongues instead of lashing out, of colleagues leaning in toward angry parents and distasteful situations calling for avoidance. Personally, it was that moment when my Assistant Scoutmaster gave up a Saturday afternoon to sit and watch blue-jays and finches flit about the branches in the woods behind my house, and with enthusiasm and presence helped me earn my coveted “bird study” merit badge. His setting aside of his own concerns to prize what looked to be valuable in me rippled forward in such a way that I wrote to him many years later to tell him about the impact his simple act of giving had on me. “I am now a clinical psychologist working with at-risk kids,” I told him. “And you taught me a lot about what it means to help a kid hang in with something that matters.”

When Mr. Mullet let go of his own agenda for that Saturday—the errands, the lawn in need of mowing, his own children’s needs—I got my first taste of greater awareness and it gave me an opportunity to see possibility in myself. It reminds me that when we’re not stuck in autopilot patterns of doing and behaving, we can more readily give to others, which brings its own joy.

I’m reminded of a very angry mother of a client. Her rage covered a vast vat of fear. I had filed a legally-mandated (though these mandates seem to offer little solace of certainty to treatment providers) abuse report with the state after this very loving and treatment-participatory parent had struck her special needs child during an intense behavioral outburst by the girl at home. Contrary to my patterning of avoidance of conflict and angry barbs sent in my direction, I allowed that not-so-pleasant failure feeling to sit inside me as the mother pointed dagger-fingers in my direction and talked of how I’d “F——d” her and her family. Instead of reacting, I consciously opened in that moment to this woman’s fear and pain, and more accurately, I opened to the pain and chaos in myself. I decided to stay quiet and let the tears hover unattended about my eyes and I rode out my urge to debate and counter the charges this mom spewed in my direction and into the narrow gap of air between us.

Later, after time had allowed the weather to clear for her, and after this mother returned to meet with me again, I asked her if she’d noticed my tears, my upset during that tough conversation.

“And did it help in some way. To see how I was reacting?”

She softened, much unlike that day of daggers. “Yes—I knew you were real. I knew I could trust you.”

I had luckily learned a bit about minding the present—not reacting and instead allowing the bad and the good to be there. And for all parents, there’s much that can grow when we hold all the pain and love our children bring.

Spend a quiet moment or two thinking about your relationship with your child. What is the one thing that comes to mind that you value about them? Don’t focus on what they “should” do or be, but instead, notice what is already there, even if it’s faint. What is the “spark” that you could breathe life into? Here are some tips for “prizing” your children:

• Anticipate upcoming interactions with them. Ask yourself: How can I let my child know that I see this valuable thing in him or her? Maybe it would be a direct comment where you let them know that you’ve “noticed something really cool” about them. Maybe it’s a gesture where you thank them for showing this side of themselves.

• Prize with patience. Let them know about the “thing” you see in them, but be patient if they don’t respond readily. Particularly for kids with low self-esteem, this positive input might feel discrepant with how they tend to view themselves. They might reject what you’re doing or saying altogether. Don’t give up! They may be used to people doing so, which only confirms the “script” they’ve been acting out. Show them with consistent prizing that a new script is possible for them.

• Let go of your own agendas; your own need for kudos. You’re the adult and they’re the kid. Find your thank you’s and congratulations for being a great mentor elsewhere. In fact, it’s better if you learn to trust that the message (if given enthusiastically and authentically) WILL resonate even if they don’t acknowledge it openly. This is not something THEY need to be polite about. When you’re planting seeds, it doesn’t make sense to get mad when it doesn’t immediately bear you fruit.

Mitch Abblett, Ph.D., is a clinical psychologist and Clinical Director of The Manville School at Judge Baker Children’s Center, a Harvard-affiliated agency with a long-standing, national reputation of service to the mental health needs of children.

© 2012 Foundation for a Mindful Society