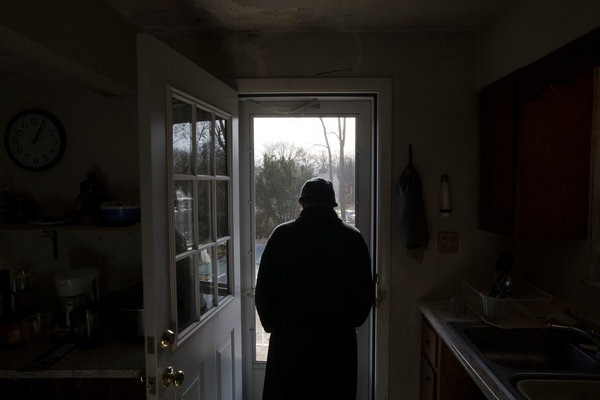 Getting sober is hard. Making sobriety last is much harder. Most people who go into a residential rehab treatment manage to detox and stay that way during their weeks- or months-long stay. But problems begin when they leave. Many patients walk out the door — and fall off a cliff.

They go back to their old drinking or drug friends and places. The stresses of normal life resume. And exactly at the moment they need it most, they’re essentially on their own.

“Typically, what people have been told to do is go to a lot of Alcoholics Anonymous or Narcotics Anonymous meetings,” said James McKay, director of the University of Pennsylvania’s Center on the Continuum of Care in the Addictions. “The usual line is 90 meetings in 90 days, and once-a-week group counseling in some sort of outpatient facility.”

It’s hard to know how many people relapse, because usually no one tracks them — a problem in itself. But it’s a lot. A survey (pdf) of studies looking at relapse rates found that only 46 percent of people who attended residential drug treatment stay in recovery. And about 40 percent of those had not managed complete abstinence.

Leaving rehab presents other dangers. The threat of overdose is greatest after a period of abstinence. The cravings remain, but spending time sober decreases drug tolerance, so a previously survivable dose can now be a killer. The same dangers apply to people newly released from jail or prison, if they did not have access to drugs inside (which many do).

“If you look at the data, it’s pretty compelling about detox-rehab churn,” said Ray Tamasi, president and chief executive of Gosnold on Cape Cod, an addiction treatment organization. “People go away for a month. It’s supposed to be magical, and it’s not. The successful transition of patients from inpatient to outpatient is abysmal.”

The lack of resources for people when they are at their most vulnerable makes no sense. No doctor would help a patient control his blood sugar or blood pressure once — and then wave goodbye. The same should be true of addiction. It’s a chronic disease that requires long-term, possibly lifetime, care. So why has care been so scarce?

One reason is money. “Insurance didn’t used to cover anything post-discharge,” said Mady Chalk, a former official of the federal agency that provides substance abuse services, Samhsa, and now the director of the Center on Policy Research and Analysis at the Treatment Research Institute, a nonprofit organization in Philadelphia. “There was an admission, treatment and then your discharge. And then people entered into a phase that used to be called ‘after-care.’ After-care is after care.”

This is changing. One reason is the Mental Health and Addiction Parity Act of 2008, which required insurers to treat mental health like physical health in group health plans. Obamacare then expanded the law’s reach to cover individual health insurance plans — and, of course, has also extended insurance to millions more people.

Another part of Obamacare is pushing health systems to gradually abandon fee-for-service payment plans and move to value-based models that reimburse based on outcomes, or that offer a set fee for treating a disease. This makes the detox-rehab churn a money-loser for health providers. Governments, too, are realizing the enormous costs to society of untreated drug and alcohol addiction.

A related reason is that the face of drug abuse is changing — a factor that has led to a softening of drug policy in general. In the last decade, 90 percent of new heroin users have been white, and suddenly people in power are noticing that drug abuse requires help, not punishment. It’s a shame this didn’t happen decades ago.

“The field has finally really accepted the idea these are problems that are often times chronic, and lot of patients need long term support if they are going to get better and stay better,” said McKay.

Medicaid is now starting to cover continuing care, and so are many private insurers.

Some examples: SSTAR Addiction Treatment in Fall River, Mass., has a policy of open access. Patients can just walk in to the group meeting of their choice every morning, or come for group or one-on-one counseling later in the day.

In Ohio, Ascent, a new company, is starting to work with a drug court, a municipal court and a treatment facility to provide patients with no-waiting virtual contact with peer coaches. Medicaid is just beginning to cover peer services, said Brian Bailys, Ascent’s founder.

In West Virginia, which leads the nation in opioid overdose deaths, treatment centers are experimenting with technology. Susie Mullens is the director of the Appalachian Technology-Assisted Recovery Innovations, or Atari, program at First Choice Health Systems, a collaborative of behavioral health treatment centers throughout the state. Through Atari, many patients get one-on-one outpatient counseling over secure video. “It’s not just to remote and rural areas,” she said. “Urban people working in jobs can’t necessarily take three hours off to go to counseling. Or they have transportation issues.”

Opioids and heroin have brought down the age of addiction, and treatment centers must adapt to a younger population. In 2012, Gosnold began an intensive recovery program. “We started piloting it in response to a lot of younger people leaving inpatient treatment and not being able to navigate a continuing care plan,” said Kristoph Pydynkowski, the program’s first recovery manager. “It can be very difficult — but younger people needed even more guidance. They had to make such a profound change at 19, 20 or 21. I sit down with someone who looks at me like his life is over: ‘Who do I hang out with? What do I do? How do I stay away from old friends? How do I make new ones?’”

Pydynkowski, who kicked heroin eight years ago, is one of nine recovery managers, each working with about 10 patients at a time. Before the patient leaves rehab, he sits down with him and maps out the days, writing in every medical appointment and counseling session. “Do you need a ride? If one of my patients misses one counseling appointment, I throw them in my car and drive them to every single appointment.”

The goal is to get people to the point where they no longer need his services, but that’s very far away at first. “They need to find activities they can enjoy that aren’t associated with drugs or alcohol,” he said. He goes to the gym and to yoga with patients. He took one 21-year-old patient out at dawn to go fishing; they sat together in silence, watching for the sun to come up.

“I was with one kid five days a week,” he said, adding that he felt like a surrogate father. “I was heating water for his mother at his house, waiting for the family to come home. They want me to bathe the ferret! How do you bathe a ferret?”

These treatment centers and networks also provide patients with a smartphone app called A-Chess, one of several new apps that offer some evidence that they help people in recovery. A-Chess has been formally tested among alcohol abusers, for whom it was associated with a reduction in the days when patients drank heavily.

A-Chess users wake up to a daily question: How confident are you of your abstinence today? A “not very confident” answer alerts family members and the recovery manager. Patients also undergo a weekly comprehensive health survey.

Before patients leave rehab, they work with their counselor to load into the app high-risk locations like their usual bar or a park where dealers hang out. When the patient ventures near one, he gets an alert: “Are you sure you want to be here?” and people whom the patient has designated are also contacted. One night at 10, Pydynkowksi got an alert that a patient was in a fast-food restaurant that had been a using spot; he had gone with the purpose of buying drugs. Pydynkowski texted him to wait, drove over, scooped him up and took him to Dunkin’ Donuts for coffee. Crisis averted.

The app also has a panic button; pushing it alerts designated people that a patient needs immediate help.

Many of Pydynkowski’s patients use the app to communicate with him and each other over message boards. One patient in her early 20s asked for help; her dog had just died and her father was sick. Three of her peers in the program picked her up and took her to dinner at Friendly’s.

Apps are new to the world of recovery, and few have been rigorously tested. One entry in an early stage is Esqyir, a simple program that sends young people in recovery text message reminders, inspirational messages and questions about their sobriety confidence. In a trial, the relapse rate of Esqyir users was much lower than that of a control group who were referred to 12-step meetings.

Another such app, about to be released, is Square2. Lisa Marsch, the director of the Center for Technology and Behavioral Health at Dartmouth, led the program to design it and is now the company’s chief executive. Square2 uses proven interventions like cognitive behavior therapy to help people not only with recovery, but also with problems like depression and pain that accompany substance abuse. In randomized trials, people who used it had higher rates of abstinence and were more likely to stay in a recovery program than those in the control group (see hereand here).

Mullens, from First Choice, said her clients are heavy users of A-Chess, especially the discussion board. “It perhaps gives client who might be more shy face-to-face a way to express themselves,” she said. “They’re also able to share sober events and resources — they post if they need a ride to a meeting.” But she said that the app had not been readily adopted by clinicians, who were too busy to spend the time necessary to learn how to use it.

Apps, by themselves, are not a continuing care program. But since they are used on phones, they are a logical tool to help people stay connected to their programs. David Gustafson, the University of Wisconsin professor who led A-Chess’s development, said that the evidence is that people in recovery need three things: social connection, motivation (“the desire to keep on keeping on”) and confidence that they know how to cope with their struggles. Apps can help with all three.

All of the programs also rely heavily on medication. The White House’s request last week for $1.1 billion more to fight opioid addiction emphasized closing a gap in medication-assisted treatment. Administration officials talked about the million-plus people who need opioid maintenance therapies — methadone and buprenorphine — and can’t get them. But there’s also a new medicine, injectable naltrexone, that blocks the craving for alcohol or opioids.

Next week, I’ll look at how medicine has improved the odds in recovery, and the even bigger changes to come.

Tina Rosenberg won a Pulitzer Prize for her book “The Haunted Land: Facing Europe’s Ghosts After Communism.” She is a former editorial writer for The Times and the author, most recently, of “Join the Club: How Peer Pressure Can Transform the World” and the World War II spy story e-book “D for Deception.” She is a co-founder of the Solutions Journalism Network, which supports rigorous reporting about responses to social problems.Correction: February 10, 2016