Why do we sigh? Does sighing help us physically? Mentally? Or is it a form of communication? 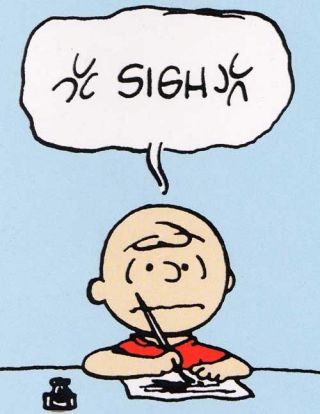 And, I realize, it’s only when I feel discontent.

I sigh when I’m frustrated by statistics and can’t make sense of the code on my computer screen. When I sit in class for three hours and daydream of all the productive things I could be doing. When I’m confused by the competing research literature on the desk in front of me. When I’m disgruntled by somebody’s ignorant comments.

But why do I do it? Does it help regulate my breathing when I’m stressed? Is it a subconscious action I do to express to those around me that I’m anxious or upset? Perhaps a mental reset button, so to speak?

In fact, it may be a combination of all three.

In a series of studies, Teigen and colleagues at University of Oslo explored the context in which people sigh—when are people doing it, and how is it perceived by others?

First, the researchers distributed questionnaires to participants to explore what “emotional” words are associated with sighing: active vs. passive? intense vs. subdued? Additionally, they were asked how frequently they sigh, and whether they do so alone or in company.

In general, the experimenters noted that sighs are associated with a negative mood—a sign of disappointment, defeat, frustration, boredom, and longing. Not too surprising. In addition, the students reported that they sigh in public roughly as often as they do in private, suggesting that it may not be a form of communication, per se.

Next, the researchers had the subjects imagine four scenarios: someone sighing among a group eating in a cafeteria; sitting next to someone on a bench who sighs; watching a person open a letter then sighing; and hearing your friend sigh on the opposite end of a telephone conversation. How did the subjects perceive each scenario? The researchers also asked them to compare feelings associated with themselves sighing versus others doing so.

In each of the four cases, participants imagined people to be sighing out of negative feelings ten times more often than for positive reasons. Furthermore, when others sigh, it’s perceived as sadness—but when we sigh, we do so out of frustration.

Lastly, the experimenters presented the participants with one of two puzzles: one solvable but difficult, the other impossible (but seemingly simple). They were instructed to work as long as they’d like and to give up at any point if desired. Sighs were counted by observers.

And sigh they did—77% of puzzlers sighed, with an average of 4 sighs per person. Most occurred during breaks between unsuccessful attempts. When asked how they felt, the vast majority of participants expressed frustration—interestingly, most denied ever sighing at all, even when told that they were observed doing so.

So what is a sigh? According to this study, it’s an expression of resignation and frustration. But depending on who’s sighing—and in what context—it can be perceived differently by others.

Of course, the bigger question is: why do we do it at all? A study by Vlemincx and colleagues at University of Leuven suggests that, indeed, sighing acts as a physical—and mental—reset.

By studying breathing patterns of participants for 20 minutes while sitting quietly, the authors found that during the time preceding a sigh, breathing begins to vary, changing in speed or shallowness.

When breathing in one state for too long, Vlemincx says, the lungs become stiffer and less efficient in gas exchange. Intermittently adding a sigh to the normal pattern, then, stretches the lung’s air sacs (alveoli). This feeling may give one a sense of relief.

And now I feel a sense of relief having researched the origin of my annoying habit. But now I must get back to all the reading I have to do before class tomorrow. -sigh-